Home POLITICS UFOs have landed in Congress, where legislation addressing them will be considered.
POLITICS

UFOs have landed in Congress, where legislation addressing them will be considered. 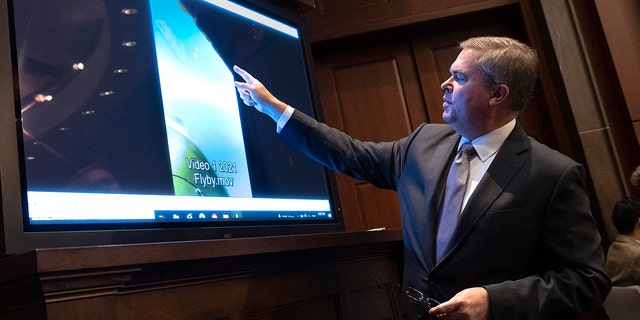 Masked in bombastic language deep in next year’s Senate intelligence authorization bill reads the following sentence: “Cross-domain transmedia threats to the national security of the United States are expanding exponentially.”

But let me put this through the universal translator for a moment. You know, like the one they use on “Star Trek.”

What if I decoded that sentence to tell you that lawmakers are petrified by the growing threats to the US from UFOs?

Do I have your attention now?

Deputy Director of Naval Intelligence Scott Bray explains a video of an unidentified aerial phenomenon as he testifies before a House Intelligence Committee subcommittee hearing at the US Capitol on May 17, 2022.
(Kevin Dietsch/Getty Images)

For the first time in history, Congress recognizes that unidentified aerial phenomena, or “UAPs” as they are now called, may exist. And, if Congress passes the intelligence bill, lawmakers will order the creation of a special government office to determine what is terrestrial and what is extraterrestrial.

The truth may be out there. But you can’t find it without first filling out the text of the otherworldly legislative bill.

That’s why lawmakers are forcing the military to unravel what we don’t understand.

“There are unexplained events out there,” said Ron Marks, a former CIA officer and senior intelligence adviser to the Senate. “And if you can’t explain it, then as a good intelligence person, you have to analyze it to know what’s there and what’s not.”

Lawmakers have long been skeptical about whether the military and intelligence communities were confessing what they knew, or admitting what they didn’t know, about things that might be flying overhead.

That’s why the House Intelligence Committee held the first hearing on UFOs in more than 50 years in May.

“When we detect something we don’t understand or can’t identify in our airspace, it’s the job of those we trust with our national security to investigate and report,” said Intelligence Committee Chairman Adam Schiff, D-Calif.

But the audience may have created more questions than answers.

Military officials played two videos at the hearing. One depicted a UFO event that they were able to explain as a visual anomaly, thanks to night vision goggles and recording equipment. The other episode remains a mystery. However, the videos shown at the hearing were difficult to decipher.

“Congress is responding to the classified data because the unclassified data we’ve all seen includes blurry images that aren’t very convincing,” said Avi Loeb, a theoretical physicist and cosmologist at Harvard University. “And I wouldn’t expect such a bill to pass unless there is much more compelling evidence, and I’m sure there is.”

There is concern that the military may be hiding something.

“I always felt like it was the military that was trying, to some degree, to disguise the advanced programs that they were working on,” Marks said. “But there are some things that need to be explained.”

Lawmakers are also concerned that if the technology doesn’t come from the US or outer space, it could be the Russians or the Chinese. And that could pose an even bigger threat.

Sen. Marco Rubio, R-Florida, the top GOPer on the Senate Intelligence Committee, suggested as much in 2020 during an interview with CBS.

“Frankly, if it’s off this planet, it might be better than the fact that we’ve seen some kind of technological leap by the Chinese or the Russians or some other adversary that allows them to do this kind of activity,” Rubio said. three. years ago. “That to me is a national security risk and one that we should investigate.”

That’s why lawmakers and others who study the cosmos say it’s up to the defense and intelligence communities to identify the unidentifiable.

“The government is the organization that monitors the sky all the time for national security purposes,” Loeb said. “So one would expect people who have their day job monitoring the sky to find those objects first. We just have to figure out what these objects are.”

Loeb said the government is not a “scientific organization,” adding that officials are concerned about “national security.” He says that increases the responsibility of the government to try to solve some of this.

It’s one thing for people in Roswell, NM back in 1947 to see things or even have sightings in the mid-1970s after the release of “Close Encounters of the Third Kind.” Another thing is that people detect things today. Loeb says that’s why the government should be able to better explain some of the events.

“I think there’s a lot better data now than there was decades ago. So instead of worrying about reports that were done decades ago that weren’t high-quality and anecdotal, we now have great instrumentation that wasn’t available,” Loeb said.

At the spring hearing, lawmakers said there was still bias within the military. Navy and Air Force pilots feared their credibility was on the line when they reported seeing strange things in the skies. Rep. Andre Carson, D-Ind., who led the hearing, said some pilots were concerned that their superiors would describe them as “nuts.”

Ron Marks invoked resistance among government officials to fully investigate the assassination of President John F. Kennedy or explore the POW/MIA issue. While nothing is conclusive, Loeb suspects that people are resisting possibilities that could change established paradigms.

No one believed in Nicolaus Copernicus and his idea that the Earth and the planets revolved around the sun in the 16th century. He faced lawsuits from the Catholic Church. Galileo was placed under house arrest for his beliefs.

“There’s a stigma and some ridiculousness to discussing the possibility of aliens. But the point is, whatever it is… we should find out what it is instead of ignoring it,” Loeb said. “We should keep an open mind because we may not be the smartest kids on our cosmic block.”

Congress must first pass the intelligence bill before anything happens. But the very existence of the language in this bill denotes a key shift in thinking about the unexplained.

Perhaps a small step that could become a giant leap when it comes to UFOs.

Chad Pergram currently serves as the Congressional Correspondent for FOX News Channel (FNC). He joined the network in September 2007 and is based in Washington, DC.

A week after he was accused of raping two women, DeMario Jackson has broken his silence. in the instagram stories Posted Wednesday, the former...
Read more
Load more

Conservatives want you to die for your personal beliefs

Cape Canaveral, Florida. The moon is about to be hit by 3 tons of space junk, a hit that will create a crater that could...
Read more

NEWYou can now listen to Fox News articles! The NFL will no longer host a Pro Bowl game at the end of the...
Read more