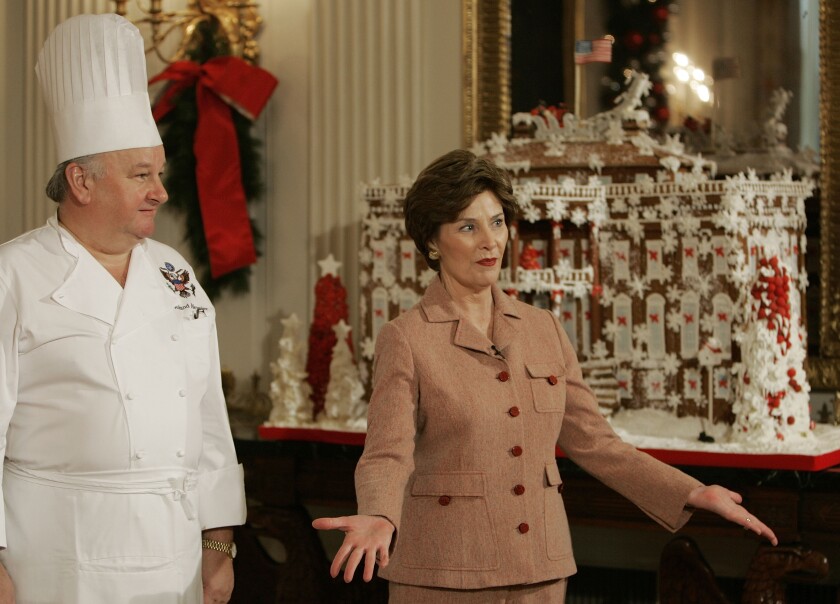 Roland Mesnier, who created often magical desserts for five presidents and their guests as the White House’s executive pastry chef, has died. Hey, 78.

Mesnier’s death was confirmed on Saturday by the White House Historical Association. who said he died on Friday after a brief illness.

Mesnier, one of the longest-serving White House chiefs, was hired in 1979 by First Lady Rosalynn Carter and retired during the George W. Bush administration nearly 27 years later.

Answering questions in an “Ask the White House” online forum in 2004, he explained that when preparing desserts not only for the first family but also for parties, receptions and dinners, he was often called upon to make thousands of cakes. He said that he planned the number according to who would attend.

“Over the 25 years I’ve been here, I’ve found that Democrats tend to eat more than Republicans,” Mesnier said. “I’ve also noticed that if the guests are mostly women, they will usually eat more cakes than the men.”

Among the hundreds of cakes she made, from dazzling cakes to decadent chocolates, she claimed she never served the same dessert twice.

At Christmas, he was known for the elaborate gingerbread houses he made to help decorate the White House. He said he, too, needed to make more cakes than usual for Christmas parties because some tended to “disappear into pockets or pockets” and often ended up as Christmas tree decorations in people’s homes.

Mesnier grew up in Bonnay, a town in eastern France, in a family of nine children and began his career as a trainee at the age of 14. White House files describe him leaving home with a cardboard suitcase and five francs to begin his apprenticeship in pastry. Maurivard in Besançon, France.

He later worked in Paris and the German cities of Hannover and Hamburg before landing a job at the Savoy Hotel in London.

In 1967, he became a pastry chef at a hotel in Bermuda and while living on the island with his future wife, a vacation school teacher from West Virginia. A decade later, he was working at the Homestead Resort in Virginia when he heard that the White House was looking for a new pastry chef.

When asked in 2004 about working at the White House, he said, “You don’t think about time off, time off, et cetera. Because your time is in the White House. Whenever they need you, you have to be there.”

After retiring from the White House, Mesnier published a memoir, “All the President’s Pies,” in English and French. Two cookbooks followed.

He is survived by his son, George Mesnier. His wife died in January.

A Times staff writer contributed to this story.

The narrative about her has been that, unflinching and undefeated, she is fighting a fair battle against the voter suppression that denied her her...
Read more

Red Bull's Max Verstappen entered the week of the Singapore Grand Prix needing a win and a little help to secure his...
Read more

Use a Wi-Fi network for guests? Check these settings

netgear Guest networks are a great Wi-Fi router feature, but if you're using a guest network in your home, make sure you use it safely...
Read more