Poliovirus outbreak expands in New York: the third county has a 62% vaccination rate 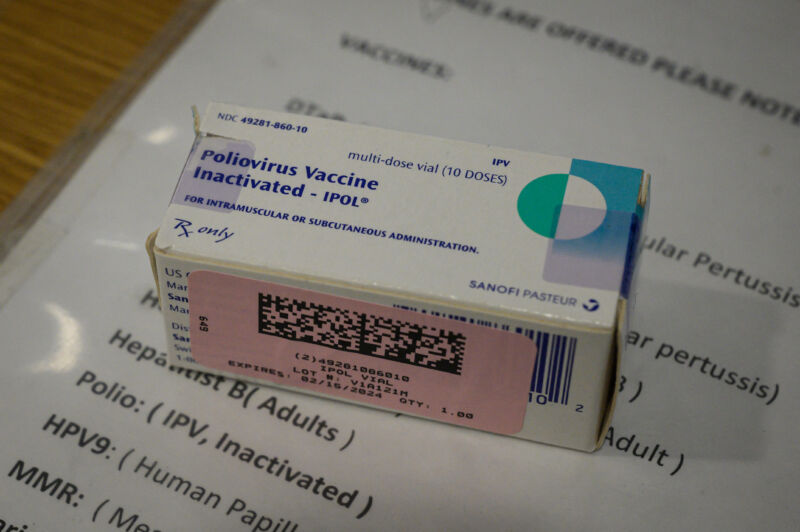 A third county in New York with a low vaccination rate detected poliovirus in its wastewater, suggesting that the spread of the dangerous virus is expanding, continuing to pose a significant threat to anyone who is not vaccinated.

Wastewater sampling in Sullivan County detected poliovirus twice in July and twice in August. The New York State Department of Health announced. Genetic sequencing determined that the positive samples are related to the paralytic polio case reported in Rockland County in July, which was genetically related to viruses circulating in London and Israel.

Sullivan Country joins nearby Rockland County, Orange County and New York City in detecting poliovirus in wastewater. At least 13 sewage samples from Rockland and eight from Orange have tested positive since April. The three counties are all on a line pointing northwest from New York City, along the southern border of the state. Earlier this month, New York City also announced the finding of poliovirus in sewage surveillance.

All three counties have low polio vaccination rates, the state health department notes. In the US, children are advised to receive three doses of inactivated polio vaccine before the age of 24 months, which is 99% effective in preventing paralytic disease. Statewide, about 79 percent of New York children have received all three of their polio shots by age 24 months. But that vaccination rate is 62 percent in Sullivan County, 59 percent in Orange County and 60 percent in Rockland County.

Those low countywide averages suggest pockets of even lower vaccination rates. For example, health officials from the Centers for Disease Control and Prevention noted in a recent report on polio that some zip codes in Rockland County have higher vaccination rates. as low as 37 percent. In such communities, the highly contagious poliovirus can spread easily, increasing the risk of more paralytic polio.

“One New Yorker paralyzed by polio is one too many, and I don’t want to see another case of paralysis,” State Health Commissioner Dr. Mary Bassett said in a statement. “Polio in New York today is an imminent threat to all adults and children who are unvaccinated or not up-to-date on their polio immunizations. All New Yorkers, parents, guardians, and pediatricians must do everything possible to ensure that they, their children, and their patients are protected against this dangerous and debilitating disease through safe and effective vaccination.”

Local, state and federal health officials have been making urgent calls for vaccination for weeks, setting up vaccination clinics. But rates of people signing up for vaccines are far from what is needed to reach the state goal of “over 90 percent” vaccinated.

The bionic pancreas, a credit card-sized device called an iLet, monitors a person's levels throughout the day and automatically delivers insulin when needed...
Read more

It was at the end of February that Bogdan Vuitsik turned on the television and realized that he was in a real-life nightmare. ...
Read more

Trump says GOP should have included Manchin ‘a long time ago’

Sackboy: A Big Adventure comes to PC next month

Sony brings another PlayStation exclusive to PC. Sackboy: A Great Adventure It will launch for PC on October 27, according to a trailer that...
Read more
Load more

This is the last week to get free rapid COVID-19 tests from the US government.

This is the last week to request free rapid COVID-19 tests from the United States government. The program will be suspended...
Read more

Your weekly horoscope has arrived and the stars are giving you a clear message: The planet of love has joined the sun in the...
Read more

The bionic pancreas, a credit card-sized device called an iLet, monitors a person's levels throughout the day and automatically delivers insulin when needed...
Read more

It was at the end of February that Bogdan Vuitsik turned on the television and realized that he was in a real-life nightmare. ...
Read more

Trump says GOP should have included Manchin ‘a long time ago’