Home GAMING Pokemon Unite has revealed its roadmap for the second half of its...
GAMING 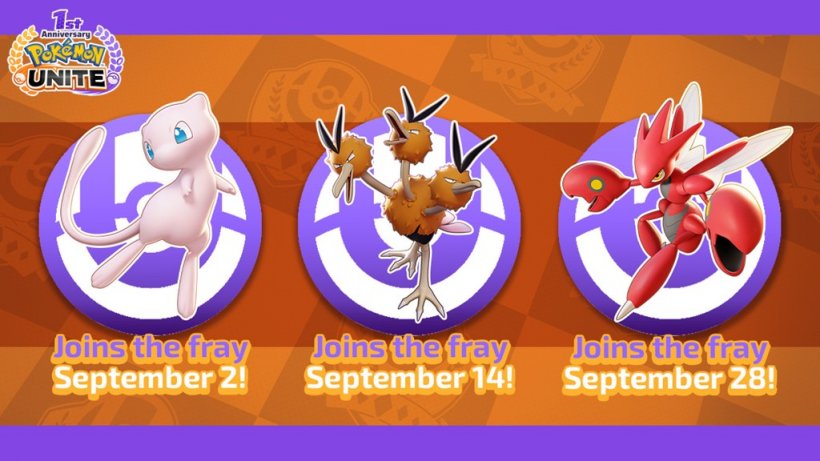 Pokémon Unite kicked off its first anniversary celebration over a month ago, on July 21. TiMi Studio and The Pokémon Company planned a ton of activities for players to take part in and there were a multitude of rewards to be won. Previously, players had the chance to get their hands on Pokemon like Glaceon, Buzzwole, and Tyranitar, along with the new Band Style Battle Pass and numerous campaigns.

However, the party does not stop there. There are many more rewards to unlock. The second phase of Pokémon Unite’s first anniversary kicks off in September and includes a ton of new things, like more Pokémon, an amazing new map, and even more cool events that can’t be missed.

Let’s start with the main attraction, which is the new Pokémon, with three of them joining the squad. On September 2, the mythical and one of the strongest Pokémon, Mew, joins the fray. While Mew’s Unite variant won’t be nearly invincible in-game, it’ll still be just as adorable and sure to pack a punch.

Next on the list is Dodrio, which will be available on September 14. A first-generation flying-type Pokémon that can move around the map at high speed while scoring goals. And finally, we have Scizor, a multifaceted insectoid who is a formidable fighter. Scizor will be coming to the game starting on September 28.

The next thing to look out for is Theia Sky Ruins, the new map for Pokémon Unite. It will replace the Aeos Island map which has a completely new look with rocky architecture and green grasslands. Theia will also feature new objectives and wild Pokémon. There will also be an event to celebrate the release of this map starting on September 2.

And to top it off, the Legacy Trainer Showdown will take place on September 9, where players will be able to take part in battles against iconic Pokémon trainers like Leon, Green, Korrina, and more. It’s going to be another amazing month for Pokémon Unite fans as there is so much content to look forward to.

Download Pokémon Unite now for free and start participating in all these activities.

So, check out this list of the best MOBAs to play on mobile!

Soi Cheang Pou-soi's crime thriller “Limbo” is the favorite at the Golden Horse Film Awards, with 14 nominations. It is far ahead of...
Read more
GAMING

Review: John Williams, at 90 and with a new violin concerto, is celebrated at the LA Phil gala

There's nothing new about the Los Angeles Philharmonic celebrating John Williams, as the orchestra did at its annual opening gala at Walt Disney Concert...
Read more

Adnan Syed, the theme of the highly downloaded Serial podcast, could have had her murder conviction reinstated after Hae Min Lee's brother asked a...
Read more

Summary of episode 2 of ‘The Kardashians’

We start this week's episode of The Kardashians learning that we have all been deceived. What we saw at last week's surprisingly dark...
Read more
Load more

NPR's Ari Shapiro talks with Taylor Moore and Erin McCormick, reporters for The Guardians, who analyzed thousands of tests for lead in Chicago water,...
Read more

How to watch HBO Max in the UK

Offer price and availability are subject to change after time of publication. SAVE 49%: ExpressVPN is the best service to access HBO Max from the...
Read more

Adnan Syed, the theme of the highly downloaded Serial podcast, could have had her murder conviction reinstated after Hae Min Lee's brother asked a...
Read more