Home SCIENCE No let up in bombing as UN team heads to Zaporizhzhia nuclear...
SCIENCE 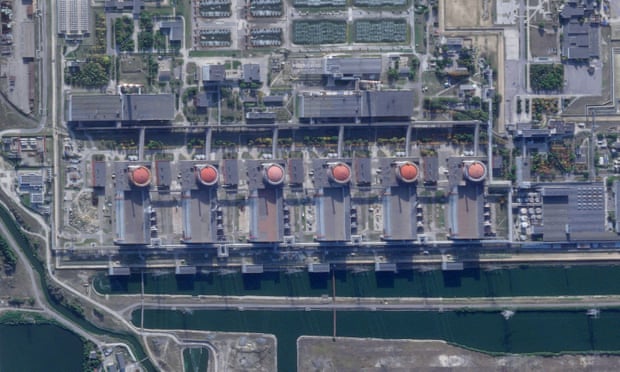 A team of inspectors from the UN nuclear watchdog is scheduled to arrive in Kyiv on Monday night en route to the Zaporizhzhia nuclear power plant in southern Ukraine, where renewed shelling has cast a shadow over their planned visit.

The head of the International Atomic Energy Agency (IAEA), Rafael Grossi, said on Monday morning that a team led by him had left to visit the power plant on the Dnieper River. “We must protect the security of the largest nuclear facility in Ukraine and Europe,” Grossi tweeted.

A spokesman for the Ukrainian Foreign Ministry, Oleg Nikolenko, said the delegation would arrive in Kyiv on Monday night. They are due to visit the plant from Wednesday to Saturday, but missiles and shells frequently hit the areas around the power plant and nearby towns, and it may be too dangerous for the mission to continue.

The arrival of this IAEA mission in Ukraine came as a spokesman for Ukraine’s southern command said a long-awaited counteroffensive had begun in Kherson province. Nataliya Humenyuk’s announcement came after a video circulated online allegedly showing a soldier from the self-proclaimed Russian-run Donetsk Republic saying that Ukrainian forces had broken through the first line of defense.

Humenyuk confirmed that there was a counter-offensive, but said the operation needed “quiet” as media attention could affect the results. His claims could not be independently corroborated.

Humenyuk said the Russian forces were strong and although morale among their ranks was low, “it was too early to relax.” Western and Ukrainian military intelligence have noted a buildup of Russian troops and equipment this summer, suggesting that Russia was preparing its own offensive.

However, Ukraine’s presidential adviser Mykhailo Podolyak warned politicians, pundits and opinion leaders not to speculate about the progress of a military operation before the Ukrainian Defense Ministry and Army issued official statements.

“I understand our wishes and dreams… But war is not ‘contained.’ Let’s filter the information and work professionally out of respect for our defenders, ”he wrote on Telegram.

Captured by Russian troops in March but run by Ukrainian personnel, Zaporizhzhia is a flashpoint in a conflict that has turned into a war of attrition being fought mainly in eastern and southern Ukraine six months after Russia launched its invasion.

Ukraine’s President Volodymyr Zelenskiy said it was “abnormal” that Russia’s state nuclear agency, Rosatom, had not been sanctioned for using radiation to blackmail and intimidate Ukrainians and Europeans.

The plant’s satellite city, Enerhodar, also occupied by Russia, was attacked overnight, setting fires to residential buildings and injuring at least 10 people, according to its mayor, Dmytro Orlov.

Russia and Ukraine have traded blame for the attack, as well as for previous attacks on and near the plant.

The deputy head of Ukraine’s presidential administration Andriy Yermak said Russia was shelling Ukrainian-controlled territory and then simulating a “response”.

The Ukrainian-controlled city of Nikopol and its neighboring settlements, which lie across the river from the power station, were also attacked on Sunday night, killing one woman and injuring two, according to Ukraine’s regional governor. Dnepropetrovsk.

The Washington-based Institute for the Study of War has said Russia had not presented evidence that the bombing was carried out by Ukraine.even though they controlled the territory.

The IAEA mission is made up of countries considered neutral by Russia and does not include representatives from Britain or the United States, according to a New York Times report.

Ukrainian Foreign Minister Dmytro Kuleba said at a briefing on Monday that Ukraine expects the IAEA delegation to “explain the facts” regarding the violation of all nuclear safety protocols.

Oleksandr Starukh, head of the Zaporizhzhia regional administration, said he was counting on a visit from the IAEA to demilitarize the plant. “At a minimum, the enemy must abandon the nuclear power plant and remove all its heavy weapons and ammunition from there,” he told a news conference.

Andriy Shapovalov, who monitors Russian propaganda for the Ukrainian government, said he believed the delegation was likely to reach the plant, but that Russia would try to convince the delegates that Ukraine was to blame for the situation.

“[Russia] it is currently collecting signatures from people in Enerhodar under a declaration demanding an end to the bombing of the nuclear plant, allegedly by Ukraine. In this way, the representatives of the aggressor country artificially create the conditions for the IAEA to draw the conclusions it needs,” he said.

The world was on edge last week when fighting around the power station damaged the last remaining power line, causing it to be disconnected from the main grid for the first time.

The power plant requires electricity to power its cooling rods and safety systems, without which engineers have 90 minutes to avoid dangerous overheating. During last week’s incident, a backup line to a local power plant was activated. Workers at the plant then reconnected it to the grid.

Reuters contributed to this report

Share
Facebook
Twitter
Pinterest
WhatsApp
Previous articleThese 31 rooms will blow your mind. One way ticket to any of these please? – ViralNova
Next articleAustralian scientists to monitor NASA’s Artemis 1 on historic space mission to the moon | POT
RELATED ARTICLES
SCIENCE

IT bosses vote for innovation, but are they forgetting about tech debt?

Despite geopolitical tensions, the latest KPMG report World Technology Report 2022 has found that there is a widespread appetite in businesses for new and...
Read more

There are considerable changes in the crypto world; some will shake stable positions of the most valued cryptocurrencies. After the cryptocurrency crash...
Read more
Load more

Assassin’s Creed Mirage is just one of three recently revealed games in the series.

How to paint upholstery

Photo: yuliya charade (Shutterstock)When it comes to updating the interior of your home (especially on a budget), paint is...
Read more

IT bosses vote for innovation, but are they forgetting about tech debt?

Despite geopolitical tensions, the latest KPMG report World Technology Report 2022 has found that there is a widespread appetite in businesses for new and...
Read more