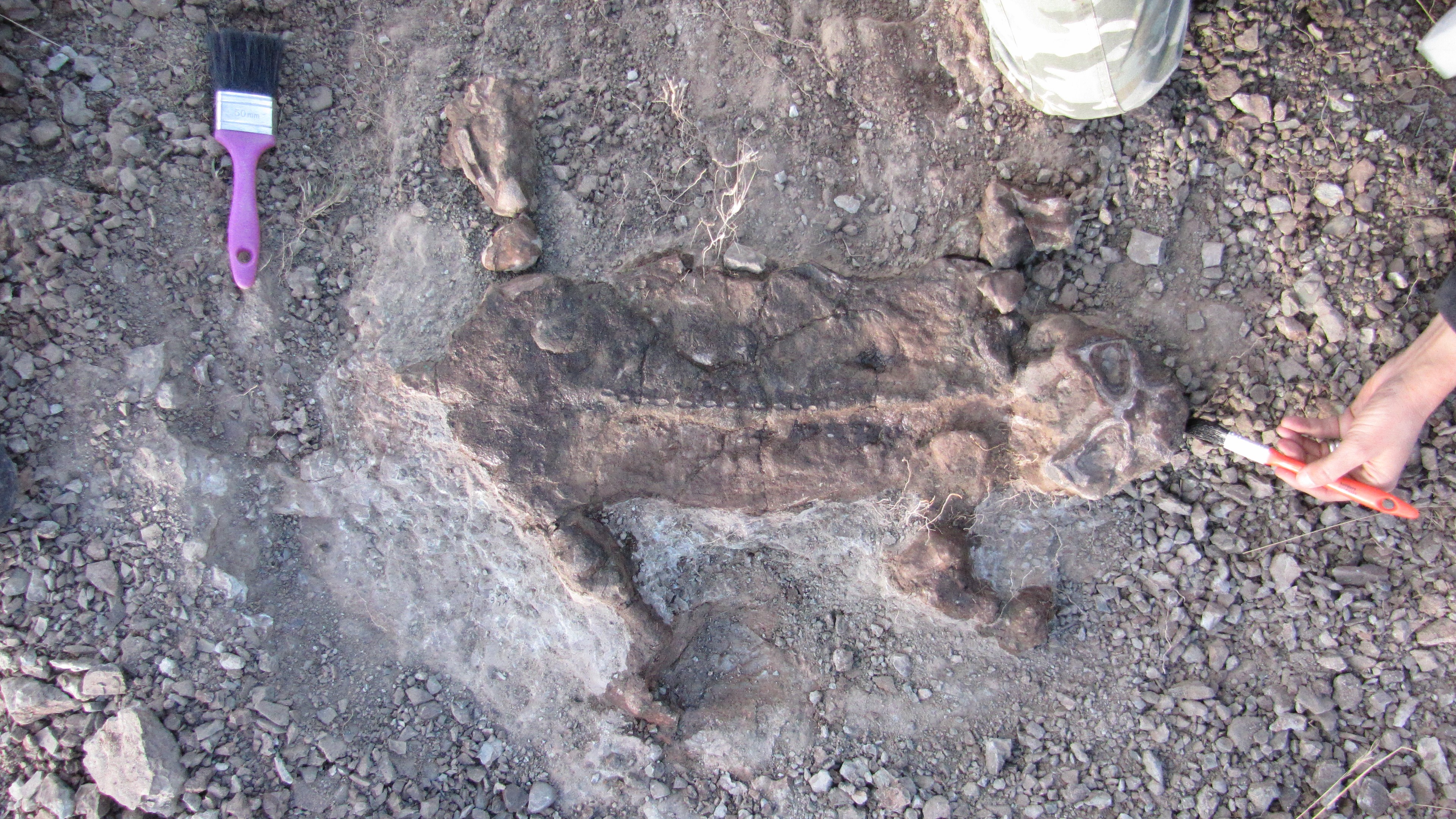 Some 251 million years ago, groups of pig-sized herbivores with tusks and beaks huddled together, died, shrank, and then fossilized to look like roadkill, with impressions of their stony skin still present in the rocks around them. .

These strange fossil layers suggest that recurring drought was a big problem for the animals, which were members of the genus lystrosaur, meaning “shovel lizard” in ancient Greek. Lystrosaurs were rare survivors of the Permian-Triassic mass extinctiona period of runaway climate change 252 million years ago that killed an estimated 70% of land vertebrates and 96% of marine animals.

The newly analyzed fossils suggest that lystrosaur it may have been surviving but not thriving. The climate change that wiped out much of life on Earth likely caused severe droughts on the supercontinent Pangaea, which could have caused the death of this particular group of animals.

“As we’re seeing today with global warming, it looks like [warming] it increases the likelihood of extreme events,” said Pia Viglietti, a postdoctoral fellow in Earth Sciences at the Field Museum of Natural History in Chicago. “That may have been what was happening in the early triassicthat there were these repeated drought events that occurred more frequently.

The researchers first found the fossils 11 years ago in the Karoo desert region of South Africa. During one excavation, they unearthed 170 tetrapods, or four-legged animals, in about 6.5 feet (2 meters) of sandstone, including multiple groups of these lythrosaurs. These strange creatures did not resemble any living animal on Earth today. They were part of a group called therapsids, an extinct order of reptiles that includes ancestors of mammals (mammals are the only descendants of therapsids that still persist today). They were shaped like a “bulldog with a beak and some fangs,” Viglietti told LiveScience.

(opens in a new tab)

Lystrosaurs were herbivores and probably used their beaks to chew through tough vegetation. They appear to have experienced a population boom before and during the end of the Permian, about 252 million years ago. While everything else was busy dying, lystrosaurs were everywhere. But they may not have been living their best lives. The new fossils come from the earliest Triassic, just after the end of the Permian. Most of the dead lystrosaurs were juveniles, which tend to be more susceptible to disasters like drought, Viglietti said.

Lystrosaurs could have been dying early in the immediate aftermath of the mass extinction, Viglietti said, and may have compensated for their shortened lifespans by reproducing earlier, a sort of “live fast, die young” way to survive a global cataclysm. (Previous studies have suggested that it also slip through it.)

The fossils suggest that the young lystrosaurs may have clustered together before they died, probably in a floodplain where they hoped to find water and vegetation. This kind of behavior is still seen today during droughts in sub-Saharan Africa, Viglietti said, where animals gather around increasingly scarce sources of water and food before succumbing to thirst and hunger.

(opens in a new tab)

Two of the fossils found in the Karoo sandstones left traces of skin in the surrounding rock, indicating that the animals may have dried up and mummified quickly after death, before being buried and fossilized. These two “mummies” fossilized side by side, limbs outstretched.

“Both of them had their arms outstretched, almost as if they had died on the way to somewhere,” Viglietti said. “They literally stopped in their tracks.”

Lystrosaurs did not become extinct for a few million years. The fact that they lived when so many other species perished is sometimes held up as evidence that the planet recovered fairly quickly from the climatic disaster at the end of the Permian, which was caused by huge Siberian volcanoes spewing gases into the atmosphere. But the discovery of a population struggling under the stress of repeated droughts suggests the Earth did not fully recover quickly, Viglietti said.

This finding gives insight into how Earth might react to the current climate crisis, Viglietti added.

“If we don’t mitigate our climate crisis, things are not going to recover, not even in the lifetime of our species or possibly other species that follow us,” Viglietti said. “Recovery from these events can take a long time.”

The findings are in press in the journal Paleogeography, Paleoclimatology, Paleoecology.

Highlights of the Science Family of Journals
Read more

Ken Starr, the independent lawyer in the 1990s who investigated President Clinton, died this week in Houston at age 76, and the story to...
Read more