Home HEALTH Legalization of recreational cannabis increases use, according to research
HEALTH

Legalization of recreational cannabis increases use, according to research 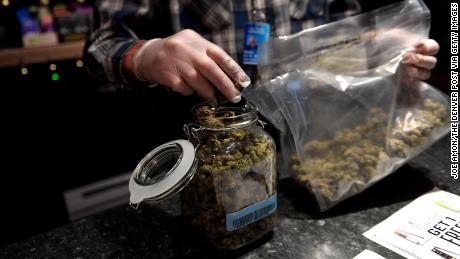 The researchers interviewed 3,421 participants from the University of Colorado Boulder Center for Antisocial Drug Dependence and the Minnesota Twin and Family Research Center in Minneapolis about their cannabis use at two different times: before 2014, when it was illegal to sell recreational cannabis, other after 2014, when it became legal to sell in colorado Only medical cannabis was legal in Minnesota during the post-2014 portion of the study.

The participants, many of whom were born in Colorado and Minnesota but had since moved, were surveyed before and after 2014 on how many days they had used cannabis in the past six months, and scientists initially found there was an increase of about 24% in use in states that have legalized recreational cannabis compared to those that have not. Based on where respondents lived at the time of the surveys, nearly every state was represented, along with Washington, DC, and Puerto Rico.

The study also included 111 pairs of identical twins, one of whom lived in a state that legalized recreational cannabis and the other in a state that did not. Among identical twins, the researchers found that use increased about 20% in states that legalized recreational cannabis compared to those that did not.

Since identical twins share so many similarities, that percentage is a more accurate estimate of the causal influence of cannabis legalization on cannabis use, said study lead author Stephanie Zellers, now a researcher at the University of Helsinki in Finland. .

Identical twins share the same genes and often the same type of upbringing, which could influence how often someone uses cannabis, said Zellers, who was a doctoral candidate in psychology at the University of Minnesota at the time. of the project.

“Because that 20% estimate comes from analysis controlling for measured and unmeasured variables,” Zellers said, “it is the most accurate estimate of the causal influence of cannabis legalization on cannabis use.”

Many states that, like Colorado, have legal recreational cannabis also have a large number of dispensaries, making purchases easy, a factor that could have contributed to the higher rate of use, Zellers said.

No legal consequences, such as fines or jail time, could also affect the increased use in recreational states, he added.

“In addition, the existence of recreational policies influences the perception of cannabis use,” said Zellers, “making it seen as safer and less stigmatized.”

How legalization affects use

“This knowledge can be used to inform strategies to implement legalization while minimizing potential harms,” ​​said Volkow, who was not involved in the study.

The statistics could also help researchers understand how recreational use affects the rate of cannabis addiction, he said.

About 30% of people who use marijuana in the United States have cannabis use disorder, the official term for marijuana addiction, according to the US Centers for Disease Control and Prevention..

In states where recreational use is legal, ads often label the drug as safe, Volkow said.

More research needs to be done on how safe cannabis is and its impact on the body before people jump to conclusions about safety. she said.

it’s not black and white

“People often want to say that cannabis is good or bad,” Volkow said. “But in biology, nothing is black and white, there is a lot of gray.”

Frequent or long-term cannabis use is associated with health problems such as chronic bronchitis and schizophrenia, he said.

However, its use has also been shown to be effective in treating some painful conditions, such as nausea and vomiting, Volkow said.

According to a study published in June in the Annals of Internal Medicine, people saw only mild to moderate pain relief with prescription cannabis products and no benefit from over-the-counter cannabis medications.

Zellers said he hopes to do more research on the effects of increased cannabis use on conditions such as mental health and addiction.

Fox News host Tucker Carlson criticized the FBI Thursday night for an alleged lack of progress in the investigation into the bombing of a...
Read more

"I am here because of the lawlessness that continues to plague the city," said a mother whose son was fatally shot.
Read more
Load more

clothing and footwear brand Dr Martens has moved much of its operations to the cloud and uses third-party backups to extend standard cloud data...
Read more

absolutely clean Fun news for all of you who like to keep things sharp: Square Enix Collective has announced that the ultra-satisfying FuturLab... shooter(?)...
Read more

iPhone users rejoiced at the release of iOS 16's ability to unsend and edit messages. Apple touted the features as useful ways to...
Read more

Fox News host Tucker Carlson criticized the FBI Thursday night for an alleged lack of progress in the investigation into the bombing of a...
Read more