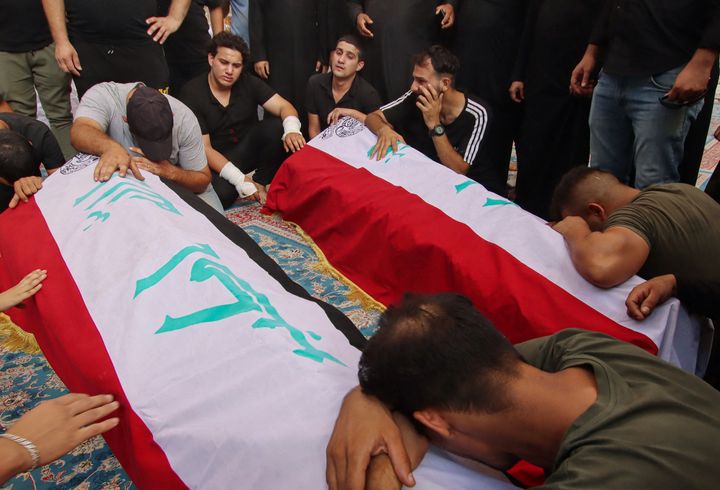 BAGHDAD (AP) — An influential Iraqi cleric called on his supporters to withdraw Tuesday from the capital’s government quarter, where they have exchanged heavy fire with security forces in a serious escalation of a months-long political crisis engulfing the nation. .

In a televised speech, Muqtada al-Sadr gave his supporters an hour to leave, and minutes later some could be seen leaving their positions on live television. Iraq’s armed forces have just announced the end of the curfew, further raising hopes that there may be an end to street violence.

The unrest began on Monday, when al-Sadr announced he would resign from politics and his supporters stormed the Green Zone, once the stronghold of the US military and now home to Iraqi government offices and foreign embassies. At least 30 people have died, authorities said.

“This is not a revolution,” al-Sadr said in a televised speech, which followed pleas for restraint and peace from several Iraqi officials and the United Nations.

Iraq’s government has been deadlocked since al-Sadr’s party won the majority of seats in parliamentary elections in October, but not enough to secure a majority government, sparking months of infighting between different Shiite factions. . Al-Sadr refused to negotiate with his Iranian-backed Shi’ite rivals, and his withdrawal on Monday plunged Iraq into political uncertainty.

Iran closed its borders with Iraq on Tuesday, a sign of Tehran’s concern that chaos could spread, though even before al-Sadr’s order, streets beyond the capital’s government quarter remained largely empty. Calm down. The country’s vital oil continued to flow, with global benchmark Brent crude trading slightly lower.

Earlier Tuesday, al-Sadr supporters could be seen on live television firing machine guns and rocket-propelled grenades into the heavily fortified area through a section of toppled concrete walls. Security forces armed with machine guns inside the area returned fire sporadically.

Some bystanders filmed the shooting on their mobile phones, though most hid behind the still-standing wall segments, grimacing as bullets exploded nearby. As al-Sadr’s forces fired, a line of armored tanks stood on the other side of the barriers surrounding the Green Zone, although they did not use their heavy weapons.

At least one wounded man from al-Sadr’s forces was taken away in a three-wheel rickshaw, with the Iraqi Foreign Ministry visible in the background. Dense black smoke at one point rose over the area, visible from kilometers (miles) away.

At least 30 people have been killed and more than 400 injured, two Iraqi medical officials said. The death toll included both al-Sadr loyalists killed in protests the day before and in clashes overnight. Those numbers are expected to rise, said the officials, who spoke on condition of anonymity because they were not authorized to release the information to journalists.

Members of Iraq’s largely Shiite Muslim population were oppressed when Saddam Hussein ruled the country for decades. The US-led invasion in 2003 that overtook Saddam, a Sunni, upended the political order. Just under two-thirds of Iraq is Shiite, with one-third Sunni.

Now, Shiites are fighting among themselves after the Americans largely withdrew from the nation, with Iranian-backed Shiites and Iraqi nationalist Shiites vying for state power, influence and resources.

It is an explosive rivalry in a country where many remain under the influence of the Iranian government even though trade and ties remain strong between their peoples. Iraq and Iran fought a bloody war in the 1980s in which a million people died.

Al-Sadr’s nationalist rhetoric and reform agenda resonates powerfully with his followers, who largely come from the poorest sectors of Iraqi society and were historically excluded from the political system under Saddam.

Al-Sadr’s announcement that he is leaving politics has implicitly given his supporters the freedom to act as they see fit.

Iranian state television cited unrest and a military-imposed curfew on Iraqi cities as the reason for the border closures. He urged Iranians to avoid any trips to the neighboring country. The decision came as millions were preparing to visit Iraq for an annual pilgrimage to Shiite sites, and Tehran encouraged Iranian pilgrims already in Iraq to avoid further travel between cities.

Meanwhile, Kuwait asked its citizens to leave Iraq. The state news agency KUNA also encouraged those hoping to travel to Iraq to delay their plans.

The tiny Arab emirate on the Gulf of Kuwait shares a 254-kilometer (158-mile) long border with Iraq.

“There are shootings around the embassy in Baghdad. Our staff are now working at the German embassy in other parts of the city,” Hoekstra wrote.

Dubai’s long-haul airline Emirates halted flights to Baghdad on Tuesday due to the ongoing unrest. The carrier said he was “monitoring the situation closely.” He did not say when flights would resume.

On Monday, protesters loyal to al-Sadr tore down the concrete barriers outside the government palace with ropes and broke down the palace gates. Many rushed into the luxurious marble halls and halls of the palace, a key gathering place for Iraqi heads of state and foreign dignitaries.

"They had this whole episode following Bunny (who was killed). How she was going to back out of the apartment building and...
Read more
Load more

The hypocrisy of the anti-vaccine patriot

Molly didn't feel particularly patriotic when she said goodbye to her husband, a Navy doctor, early one September morning. She was leaving on...
Read more

Do I have to invite a friend-enemy to my wedding to keep the peace?

Do I have to invite a friend-enemy to my wedding to keep the peace?For you News Sports Entertainment Life Money Technology Travel OpinionQuestions: "I'm...
Read more