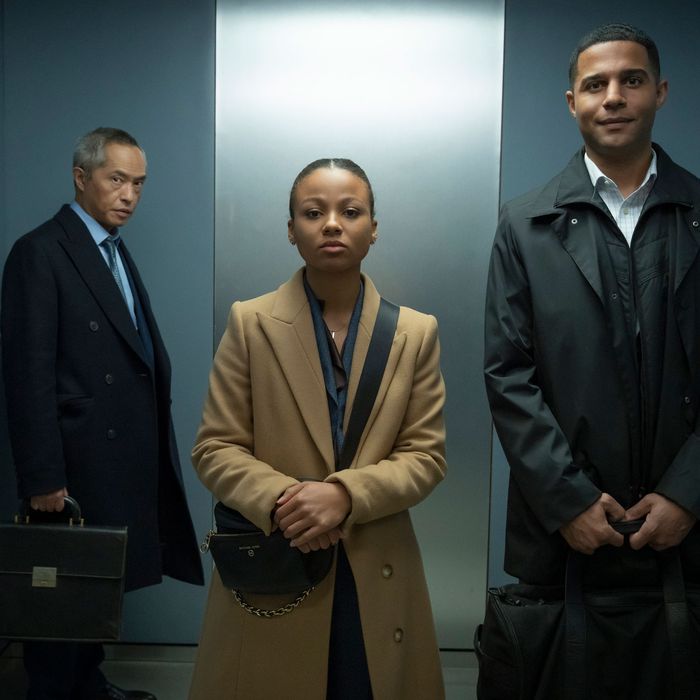 merry christmas from Industry! It’s August in our world but December in theirs, with Tchaikovsky and baked goods alike. I take back everything I said last week about starting to lose sight of whether the episodes are good or not because of my investment in the characters. This week’s show is a genuine stunner that manages to wrap hilarity, trepidation, devastation, and sex all into one big loop. It’s also an episode where each character has genuinely important stuff, so I’m going to dive right in.

First of all: Eric has been “promoted” to a cubicle where he supposedly handles customer relations. Rishi calls it “baby kisses,” but when Harper visits Eric to get his clearance to fill in for an Equity guy on a business trip to Berlin, Eric isn’t kissing babies so much as miserably tolerating his nasal assistant who’s hanging art. Yeah, Eric has his own office, and yeah, I guess he’s technically higher up the Pierpoint structure, but God, this is heartbreaking. The fight barely flickers under its steely surface as he approves of Harper’s participation in the business trip.

Moving on, Gus may also be promoted: Aurore is moving from local politics to bigger things nationally, and she wants to take Gus with her. Specifically, she is chairing an antitrust committee because guess what? Amazon is trying to buy all of Fast Aid, but the government isn’t all that interested in a Bezos healthcare monopoly and would rather throw its support behind Rican. This is the windfall Harper bets on! But more importantly, Gus isn’t that interested in promotion because he just happens to like helping people in a local and tangible way.

Then we have Robert, who in any other episode would have the saddest story, but not in this one because everyone is battling inner demons this week. Rob returns to Oxford to attend a recruitment event and hopefully convince new people to join Pierpoint. But along the way, he gets an unexpected phone call: Clement Cowan, his old mentor from season one, is dead and has left items in his will for Rob. The funeral is the same day as the Oxford event, so Rob won’t be attending. The subtext here is that Clement probably overdosed; for those who have forgotten, Clement was the bitter Scottish banker at the desk who took Rob under his wing, bought him his first custom-made suit, and also had a heroin problem. He was fired at the end of the first season, and while it doesn’t seem like he was on Robert’s mind the whole time, it’s an obvious shock when he finds out that Clement is dead. I don’t know why I didn’t put two and two together, but seeing Clement inject himself in the back of a suit store last season is likely contributing to Robert’s season two sobriety.

Venetia, the new graduate at Yasmin’s desk, is also an Oxford graduate and, as a result, is also on a trip with Robert. The two have a vulnerable conversation where we learn that Robert’s mother was the person she wanted him to go to Oxford with. We also learn that she is dead. So Robert used to sing in the choir and is from the Oxford area. All of these things, the holiday season, the proximity to home, Clem’s sudden death, lead Robert to visit his father at the bar where he works. Things start out promising until his father turns him down for other clients and doesn’t give his son special treatment. This sends Robert into tears, drinking and snorting coke like it was the first season, and making a fool of himself at the recruiting dinner. Venetia, who thought she might have found a genuinely nice person to hang out with, is despondent.

What I have described so far is a lot! The wildest part is that I haven’t even described the beating heart of this episode, which is Yasmin and Harper’s trip to Berlin. Business background: The two head to Berlin to move Anna, the early-season socially conscious investor, from working with Yasmin, who is moving into private wealth management, to work with Jackie, her funny, foul-mouthed co-worker. worked. Harper follows him under the pretense of trying to steal Anna as a client for her desk.

So Harper, Yasmin and Jackie head to Berlin, where they stay in Yasmin’s father’s apartment, which is huge and beautiful. The three of them go to dinner, and when Jackie retires for the night, Harper and Yasmin have a bit of a heart-to-heart. Yasmin talks about getting back in touch with her father and how he is seemingly good, but she also makes her feel like her past has been a lie. This is when Harper confesses to Yasmin that she is actually in Berlin to find her brother; in fact, she chose the restaurant the two of them are at because she had a feeling he worked there. It’s a rare moment that shines with the charged friendship the two shared in the first season. As they leave the restaurant, Harper returns one more time to confirm that her brother doesn’t work there. She walks past the waiters and cooks into the back room where someone is washing dishes. Somebody turn around. It’s her brother, John Daniel.

What follows is the beginning of an awkward meeting. John Daniel doesn’t seem happy to see Harper. In any case, he actively tries to get rid of her, but Harper, as we know, is tenacious, so the trio ends up in a Berlin club. John Daniel continues to try to avoid Harper, Yasmin gets high and upset, and for a second it looks like the whole effort might be a failure. But then John Daniel relents and takes Harper back to the now closed restaurant where she works. The two share a warm and mischievous camaraderie, a recreation of her sisterhood. As John Daniel cooks something for the two of them to eat, he announces to Harper that he has been sober for six months, or at least was, until he started drinking at the club they had just been to. It becomes clear that the two shared an abusive mother and that John Daniel blames Harper for much of the anxiety he experienced when he was forced to play tennis. The story Harper had been telling herself, that she was a cheerleader for her AWOL brother, begins to unravel.

One thing leads to another and Harper and John Daniel end up at John Daniel’s drug dealer’s house. Outside, it’s morning. The dealer leaves for work, but lets the brothers stay at his apartment while John Daniel smokes meth. I must admit here that simply summarizing the plot points of this interaction does not do it justice. Myha’la Herrold deserves her flowers for this episode and this scene in particular, where we see the iron-clad, egotistical Harper tossing through a variety of personalities: the adoring little sister, the disillusioned young woman, the professional who’s trying to fake it. until she does. When John Daniel gets mad at her, she finally snaps and tells him how mad and heartbroken she was at her, thinking he had been dead this whole time. Whatever Harper expected when meeting her brother, it wasn’t this.

As Harper confronts her brother, Yasmin confronts her past. Still stoned from the drugs she took at the club, she searches through her father’s desk until she finds the address of her old babysitter. She shows up at said nanny’s house and proceeds to have a wacky conversation hinting at a stepbrother Yasmin never knew she had, her father’s specter as a sexual predator, and what the NDA her nanny signed. really covers. . Remember, it’s not just a NDA and woman for whom his father is implicated, but Many. Yasmin came to Berlin hoping to find nostalgia in the house where she spent time as a child. Instead, she is realizing what happened around her when she was younger.

At the meeting with Anna, the apparent real reason the two came to Berlin, Yasmin and Harper are shocked and look exhausted while Jackie tries to keep things light. The episode ends in London, where the DVD attempts to ask Harper how she did in Berlin and is brutally shut down as “Carol of the Bells”. play in the background.

I don’t have much else to add this week except: Rishi and DVD didn’t get promotions. Is dissatisfaction at Pierpoint on the rise?

Keep up with all the drama from your favorite shows!

By submitting your email, you agree to our Terms other Notice of Privacy and to receive our correspondence by email.

Forty years after the infamous Tylenol murders killed her father and two other close relatives, a Wisconsin woman is refusing to take the popular...
Read more
Load more

Bob the Mini Dishwasher Review: Built for the Truly Lazy

You know where this is headed. About 10 minutes before the end of the first cycle I ran, I heard a gurgling sound...
Read more

When a celebrity or influencer buys a collection of NFTs and then posts about it on their social media, they...
Read more