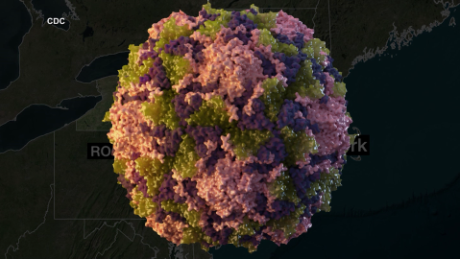 The four wastewater samples were collected in July and August in Sullivan County, northwest of Orange County. CNN has previously reported that polio has been identified in sewage samples from Rockland County, Orange County and New York City. The state Department of Health announced Friday that the Sullivan County samples were genetically linked to the previously identified polio case in Rockland County, where a man was diagnosed with paralytic polio.

“One New Yorker paralyzed by polio is one too many, and I don’t want to see another case of paralysis,” State Health Commissioner Dr. Mary T. Bassett said in a statement. “Polio in New York today is an imminent threat to all adults and children who are unvaccinated or not up-to-date on their polio vaccinations. All New Yorkers, parents, guardians, and pediatricians must do everything possible to ensure that they, their children, and their patients are protected against this dangerous and debilitating disease through safe and effective vaccination.”

Polio can cause incurable paralysis and death, but most people in the US are protected by vaccination. However, vaccination rates in several New York counties are low. As of August 1, Rockland County’s polio vaccination rate was 60.34%, the release shows. Orange County’s is 58.68% and Sullivan County’s is 62.33%. The polio immunization rate for all of New York State is 78.96% for children who have received three polio immunizations before their second birthday.

The state health department, in collaboration with local health authorities and the US Centers for Disease Control and Prevention, began sewage surveillance after a young adult was diagnosed with polio in Rockland County in June.

So far, the state has identified only one case of polio. However, many cases of polio are asymptomatic, and people can spread the virus even if they do not experience symptoms.

Earlier this month, Dr. José Romero, director of the CDC’s National Center for Immunization and Respiratory Diseases, said the polio case identified in New York is “just the tip of the iceberg” and an indication that “you should there may be several hundred cases circulating in the community. “

campaign action "If he homeowners are not happy with a court ruling, they should do what other litigants do and appeal. Allowing them...
Read more

Tems performs ‘No Woman, No Cry’ at the Global Citizen Festival

This November, Tems' version of Bob Marley's "No Woman, No Cry" will appear on Marvel's soundtrack. Black Panther: Wakanda Forever. A portion of...
Read more

Football fans are having difficulty watching the NFL Sunday Ticket season opener due to issues with the DirecTV website and app. ...
Read more