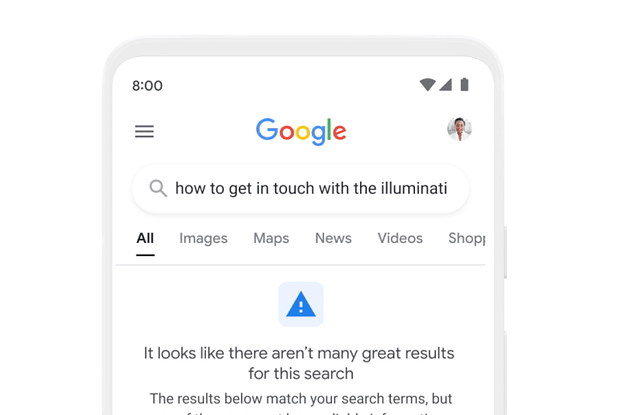 If you now search for a question that has no real answer, as examples, Google cited “In what year did Alexander Graham Bell first write ‘Call me maybe’?” and “When did Snoopy assassinate Abraham Lincoln?”, though it’s still unclear who exactly is looking for this: Google will refrain from providing a snippet with information that is only partially correct (previously it showed the date of Lincoln’s assassination and ignored the fact that a comic strip beagle did not, in fact, kill the former president). Google said it has reduced the snippets that trigger in cases like these by 40%, though a company spokesperson declined to share the total number of search queries that triggered them in the first place.

These snippet enhancements will also appear in the “People Also Ask” section on the search results page, Nayak said.

One final new feature coming this week to people who use the Google app on iPhones and iPads, for whatever reason, instead of a browser: If you need more context about a website you’re on, like its reviews, how well it is cited as a source, who owns it, and more, you can swipe up from the bottom navigation bar to find out. The feature will come to Android, Google’s own operating system for phones and tablets, later this year.

Still, none of these improvements will apply to YouTube, the other big Google-owned platform where misinformation sometimes run rampant. “Their problem is a little different than ours,” Nayak said, because unlike Google Search, YouTube actually hosts videos and serves them algorithmically. “We don’t share code bases directly. We don’t work on YouTube directly and YouTube doesn’t work on us directly.”

Charlize Theron revealed to harper's bazaar a "disparaging" experience from her early days as an actress in which an unnamed male director made repeated...
Read more

CNN management tries to change the perception of the network

NEW YORK (AP) — It was the kind of story media reporter Brian Stelter would normally sink his teeth into, if it didn't involve...
Read more