Home HEALTH Could virtual reality be the future of poultry health?
HEALTH

Could virtual reality be the future of poultry health? 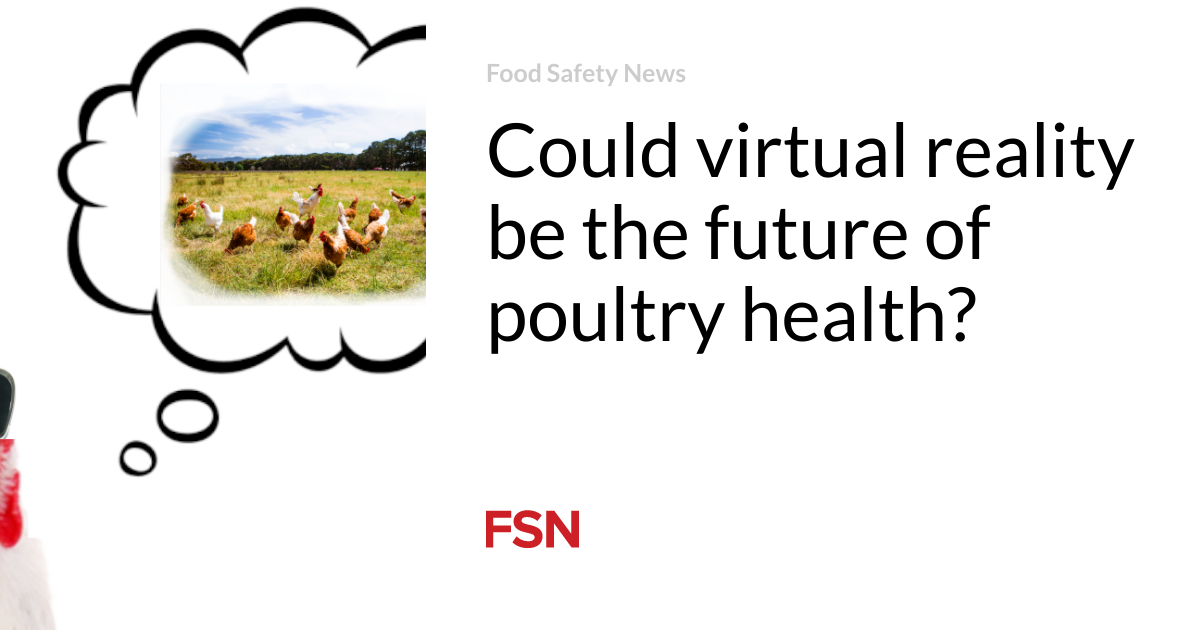 Researchers at Iowa State University are trying to increase the well-being and health of chickens through virtual reality (VR).

In recent years, VR technology has made its way into every part of life. From video games to job training, virtual reality tries to give users an experience as close to reality as possible. While this technological advance may sound dystopian to many, researchers across the country are finding ways to improve our daily lives.

Iowa State researchers recognized that the growing demand for cage-free eggs stems from the goal of providing hens with better welfare, particularly in terms of natural behavior. But because cage-free systems can present challenges, such as injuries and bacterial infections, most laying hens are kept in conventional cages. Mellata saw VR technology as a way to simulate a free range environment in laying hen housing.

“There are many challenges associated with outdoor production environments for laying hens, including the potential for additional injury, disease and risk from predators,” Mellata said. “However, hens in free-range environments tend to engage more often in positive and ‘normal’ behaviors that seem to improve their overall health and immunity.”

The study, “Exposure to a virtual environment induces biological and microbiota changes in laying hens onset,” published in the peer-reviewed journal frontiers of science, found that showing chickens virtual reality scenes of chickens in more natural settings reduced indicators of stress in the chickens’ blood and gut microbiota. “It’s intriguing to think that even displaying hens in free environments can stimulate similar immunological benefits,” Mellate said.

Chickens are very receptive to visual stimuli. Like their T-rex ancestors, chickens have poor depth perception and are better at recognizing objects when they are in motion than when they are stationary. According to the study, this means that environmental factors, such as color, light quality, duration and intensity, affect the birds’ feeding behavior.

For example, when watching a video of baby chicks feeding, the birds will mimic these behaviors and move closer to their food more quickly.

The researchers showed video projections of chickens in free range environments. The scenes showed indoor facilities with access to a fenced-in outdoor play area and an open, unfenced meadow with grasses, shrubs, and flowers. A group of 34 hens from commercial poultry flocks were exposed to the videos for five days on all four walls of their housing. The videos were tested during a period of high stress risk: 15 weeks after hatching, a stage when commercial hens are regularly moved to egg-laying facilities.

Visual-only recordings showed diverse groups of free-range chickens engaging in activities associated with positive bird behaviors depending on the time of day, such as preening, perching, dust bathing, and nesting. The videos were not shown to a control group of the same size and age in the same type of housing.

The researchers analyzed blood, tissue, and samples of their gut microbiota. Chickens in the treatment group showed several beneficial changes compared to the control group. Differences included lower indicators of stress and increased resistance to avian pathogenic E. coli bacteria that can cause sepsis and death in young birds.

“We need more research, but this suggests that virtual reality could be a relatively simple tool to improve bird health in confined environments and improve food safety,” Mellata said. “It could also be a relatively inexpensive way to reduce infections and the need for antibiotics in egg production.”

The team hopes to expand the research to conduct a similar study over a longer time, with more chickens and chickens at different stages, to see if the results can be replicated.

“Future research in collaboration with our partners in veterinary medicine is also needed to investigate the neurochemical mechanisms that link visual stimuli to changes in the guts of chickens,” Mellata said.

The entire study can be seen here.

(For a free subscription to Food Safety News, Click here.)

Share
Facebook
Twitter
Pinterest
WhatsApp
Previous articleThey were some of the last journalists in their newspapers. Then came the layoffs.
Next articleHospitals cut jobs and services as rising costs put pressure on budgets
RELATED ARTICLES
HEALTH

Kyiv, Ukraine (AP) — After being surrounded by Ukrainian forces, Russia withdrew its troops Saturday from an eastern Ukrainian city it had been using...
Read more

January 6 hearing schedule, how to watch and what to expect

The House committee investigating the January 6, 2021 attack on the US Capitol by a pro-Trump mob will have what is likely to be...
Read more