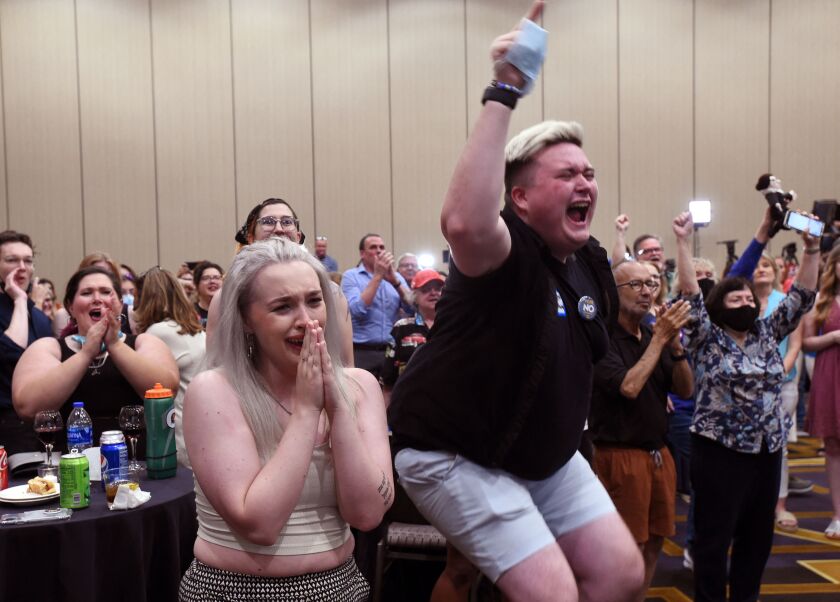 The Life at Conception Act is less than 300 words long, but its language leaves little room for ambiguity about abortion.

The bill, introduced in the US House of Representatives earlier in the session of Congress, seeks “equal protection for the right to life of every human person born and unborn,” specifying that it covers “all stages of life, including the time of fertilization, cloning, or other time when an individual member of the human species emerges”.

Bottom line: “It would be a nationwide abortion ban,” said Mary Ziegler, a professor at UC Davis School of Law who studies reproductive rights. Even California, which has positioned itself as a haven for abortion rights, would be affected.

The legislation was co-sponsored by more than half of California’s Republican congressional delegation, including three representatives facing highly competitive races in November’s midterm elections: Reps. Michelle Steel of Seal Beach, Mike Garcia of Santa Clarita and David Valadao of Hanford.

But in the two months since the Supreme Court’s Dobbs ruling overturned Roe v. Wade by removing constitutional protections for abortion, the candidates have been remarkably quiet on the issue. Nationally, Republican candidates in close races have appeared on the defensive, running ads that downplay their anti-abortion stances. Instead of celebrating monumental reversal of Roe vs. Wade, the GOP is trying to shift the focus elsewhere, even as Democrats pretend to keep the spotlight on him.

“I think California Republicans would like to pretend [the abortion issue] it doesn’t exist,” said Jodi Balma, a political science professor at Fullerton College who supports abortion rights.

In the past, Steel, Garcia and Valadao have quietly backed a number of anti-abortion efforts. All three signed a letter asking the Supreme Court to end federal protections for abortion and each of them carry A+ grades from Susan B. Anthony Pro-Life America, a politically powerful anti-abortion group.

Steel, who ran for re-election in one of Southern California’s most closely watched races, signed the Life at Conception Act as a co-sponsor 16 months ago. Now, despite his support for the measure, he says discussions “around a national abortion ban are purely hypothetical at this point.”

Polls have consistently found that most Americans support some restrictions on abortion but did not want Roe repealed. For decades, Republicans have used abortion as a powerful issue to galvanize their base, particularly religious conservatives. But after the Dobbs ruling, there are signs that Democrats are more motivated. A UC Berkeley Institute of Government Studies Survey published last week showed that 91% of California Democrats consider the issue important when deciding how to vote in congressional, state and local races.

“Dobbs has changed the reality of the abortion debate, and I don’t think everyone understands that yet,” Balma said.

After Roe was struck down in June, voters in conservative Kansas roundly rejected an effort to remove abortion protections from the state constitution. In four House special elections, Democrats this summer won more votes than Joe Biden in those districts in 2020, a sign that the pro-choice energy may be long-lasting.

None of the three top Republicans in California answered direct questions about the Life at Conception Act, which was introduced about a year and a half before the Dobbs ruling and endorsed by 166 Republican members of the House. Ziegler, a UC Davis law professor, said the legislation’s abortion ban could also extend to some contraceptives, such as morning-after pills, she said.

Steel and Garcia were not available for interviews, but did provide comment on the abortion debate. Both indicated they support exceptions to abortion bans in cases of rape, incest or threats to the mother’s health, a departure from the bill. The measure is dormant in the Democratic-led Congress, but that could change if Republicans take control of either chamber next year. (The bill was never brought to the floor, where amendments could be tabled.)

Valadao’s campaign did not respond to inquiries about this story.

While the legislation stalls at the federal level, there has been a flurry of activity in conservative states since the Dobbs ruling.

Thirteen states, in anticipation of Roe’s overturn, had “trigger laws” to ban abortion as soon as the Supreme Court ruled, according to the Center for Reproductive Rights, while several others had pre-Roe abortion restrictions that had not been enforced. This month, Indiana became the first state to pass a ban on the procedure since the Dobbs ruling. Laws are changing in many states as advocates sue to block restrictions, but abortion is currently illegal in at least 11 states, according to the center.

Bills have been introduced in eight states to give legal rights to fetuses, according to the Guttmacher Institute, a nonprofit organization that supports abortion access and tracks abortion regulations. Georgia and Arizona have passed bills granting fetal identity, but the law in the Grand Canyon state was blocked by a federal judge in July who ruled the measure was too vague.

In a statement the day the Supreme Court reversed the 1973 Roe ruling, Garcia said abortion is now an issue for states and the decision “will not change access to abortion” for Californians.

“If you are concerned about your right to abortion,” he said, “call your state senator or assemblyman, as the law is now under the direction of Sacramento.”

His campaign, like that of most Republicans, is trying to keep the focus on the economy and inflation.

When asked about abortion, a Garcia spokesman, Ben Williamson, said economic issues are “at the forefront” of life for voters in his district. “Garcia will continue to fight for them on those issues, and voters will have their say on the abortion issue at the state and local levels, just as they should.”

But Democrats are seeking to make it harder for Republicans to dodge the issue. The party has spent more than $57 million on television and digital ads mentioning abortion since Dobbs’ ruling, according to the media-tracking firm AdImpact, compared with just over $10 million for Republicans.

If Democrats are going to pull off an upset in November and maintain control of the House, it will have to be with the help of voters in districts like Steel’s, which curves through a section of northern Orange and south Los Angeles, and Garcia, in northern Los Angeles County.

College-educated white voters in suburbs like these will be key to determining the balance of power in November, said Mike Madrid, a Republican political consultant who co-founded the anti-Trump Lincoln Project. Nationally, about two-thirds of college graduates say abortion should be legal in all or most cases, according to Pew Research Center data.

“Those communities have a very uncomfortable relationship with the Republican Party in general,” Madrid said. “They are still Republicans because they are not Democrats. But these social issues have really tested his ability to stay in the party.”

The number of registered Democrats in Orange County has increased by more than 4,100 since a draft of the landmark abortion decision was leaked in May, compared with an increase of just 946 for Republicans, according to data from the Registrar of Voters. of Orange County.

“When you touch on something as fundamental as women’s bodily autonomy, that’s going to spark turnout,” said Jay Chen, Steel’s Democratic opponent, pointing to the results in Kansas. “Republicans, Michelle Steel in particular, have overstepped the mark by sponsoring and pushing to overturn Roe v. Wade and sponsoring things like the Life at Conception Act.”

Chen, a businessman and Navy Reserve intelligence officer, has frequently attacked Steel over the issue on social media, calling his position extreme.

Steel said she is “proud to support life,” with exceptions to abortion bans for rape, incest, and the health and life of the mother. Like many other Republicans, she described Democrats as too permissive in allowing abortions late in pregnancy. House Democrats recently passed a bill that would allow states to ban abortion after viability, except in cases where a woman’s life or health is at risk. The measure has no chance of success in the Senate.

“Unlike my opponent, I do not support the Democrats’ radical agenda of abortion on demand, or late painful abortions where we know the child may be in pain, nor do I support taxpayer-funded abortion,” Steel said. “I also think we need to protect women and make sure they understand all the resources they have to choose life.”

In the Central Valley, Valadao has been criticized by his Democratic opponent, Rudy Salas. The assemblyman described Valadao’s support for the Law of Life in La Concepción as “appalling.”

“We must prevent this bill from passing,” he said in a statement.

But the issue may play a less prominent role in the Valadao district than it does in Orange and Los Angeles counties, said Thomas Holyoke, a political science professor at Fresno State University.

“I think it’s going to be a little bit quieter in this district than maybe some,” he said, adding that economic and water issues are likely to be more important in the agriculture-rich Central Valley. “It’s a Democratic-leaning district, no question about it, but there are a lot of conservative Democrats.”

The challenge is greater for Garcia, whose North Los Angeles County district has become more Democratic after redistricting. Former state assemblywoman Christy Smith, who has lost twice to Garcia, hopes abortion will help make a difference this time.

“With so much focus and momentum on the issue, with the fact that we’re going to have a statewide ballot initiative to codify those protections into our state constitution, this is absolutely an issue that could really change the shape of this election,” he said.

Raymond Dearie, Trump’s special teacher candidate, will be accepted by the Justice Department

Sep 8—A special education teacher at Atholton High School in Columbia was arrested Wednesday by Baltimore County police on charges of possession and distribution...
Read more