Home POLITICS Are we the problem? The new Dean of Columbia J-School fights...
POLITICS

Are we the problem? The new Dean of Columbia J-School fights for his place in the industry 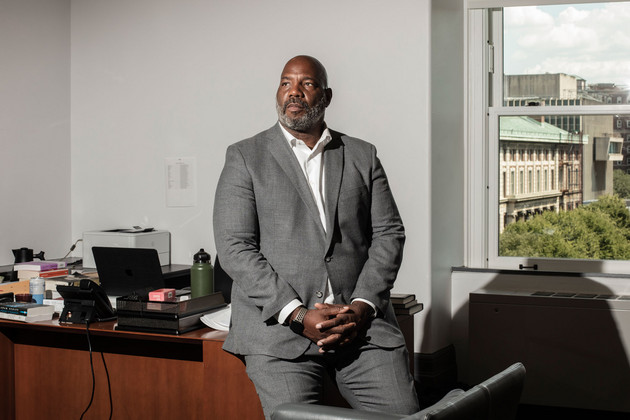 A master’s degree in journalism from Columbia, in total a nine-and-a-half-month program, costs approximately $121,290. Depending on where you’re looking, a journalist with a master’s degree earns on average between $36,000 and $58,000 after graduation. Columbia may offer generous aid packages (73 percent of those who applied for scholarship aid received funding, and the average award is about $40,000), but its students also regularly drown in debt. For many young people with journalistic aspirations, the training offered by Columbia is a luxury they literally cannot afford.

Cobb is well aware of the problem. He told me that he regularly hears from students who have always dreamed of becoming journalists but now worry about how they will pay for school or the burden of their debt. “It’s not a novel idea that we need to find some other way for this to exist,” he says. “We just don’t know what that is right now.”

Jelani Cobb did not attend school of journalism, an irony of which he is well aware. Born William Anthony Cobb in Queens, New York, he learned to write from his father, an electrician named Willie Lee Cobb, who had a third-grade education but made the education of his children a top priority. Jelani says he remembers his father’s big hand wrapping his little one in his house while he was learning the alphabet.

Cobb was the youngest of four in his family, though the only child his parents had together. He went to Howard University, where it took him seven years to complete his bachelor’s degree because he didn’t have the money to consistently pay tuition; he spent much of that time writing freelance and protesting at campus rallies. (He occupied administrative buildings to protest apartheid and the appointment of Lee Atwater as trustee of the University.) When he was 19, he changed his middle name to Jelani, a Swahili word meaning “full of strength” or “mighty,” because, he says, “a very serious and less serious reason.” For starters, he wanted to reconnect with his African heritage, a connection that “has been forcibly taken away from many black people in the United States.” And then there was the problem of his initials: WAC. He no longer wanted to be “wak(k) “.

If his seven years at Howard weren’t enough, Cobb embarked on a Ph.D. history program at Rutgers. He credits his undergraduate mentors and his love of the physical spaces of college campuses for his continued interest in academia: The high school he attended, Jamaica High School, was designed by the same architects who designed Columbia. Preparing for his new job, Cobb recently came across his old personal statement about why he wanted to get a Ph.D. in history; he wrote that he thought it would make him a better journalist.

Cobb has settled into academia for years, while also occasionally leaving the classroom to report. And his reporting has paid off: In 2018, he was a Pulitzer Prize finalist in commentary for “combining masterful writing with a deep understanding of history and a deft reporter’s touch to bring context and clarity to the issue of race.” . Meanwhile, a gas mask Cobb wore while covering the Ferguson protests and the birth of the Black Lives Matter movement is at the Smithsonian National Museum of African American History and Culture.

His office is still a work in progress (“a paint problem,” he tells me). His books are packed and still in his old faculty office downstairs. The essentials that made it to the dean’s office (already packed with a table, a desk, and a few couches) are his sleek road bike (he says he also has a cruder electric one) and a photo he took of his daughter. Christine, now five years old, plays in the sprinklers.

“My daughter keeps referring to me as ‘the dean,'” she laughs. “She thinks that comes with a cape.”

reporting on the ground and working in academia don’t always fit together naturally. Spend enough time in certain academic circles that it’s easy to become afflicted with a certain kind of circular thinking. All relatively small problems become the result of structural factors beyond your control.

Example: journalism school is too expensive. This is especially true given that journalists cannot expect to earn a lot of money after graduation. And it gets worse when you think about where graduates end up right after school. They either don’t want to or can’t afford to take a low-paying local news job in a smaller city or town, if they still exist. So they stay in New York or Washington. This contributes to professional networks that drive job opportunities and elite bias in the media. These biases lead to worse reporting, fewer people interested in journalism, and less control over the crooks who steal from the poor and give to the rich, who set the market for how expensive graduate programs are. The great price of journalism school is actually a crisis of capitalism.

For someone proudly on the political left like Cobb, there is probably little wrong with that logic. He knows these arguments from his decades in academia. But they can also be paralyzing: if it all requires a total takedown of our broader systems, what do we do while we wait for the revolution?

Cobb is eschewing that logic to examine the problem in a way that suits the trade school he’s been tasked with running. Journalism school is too expensive. Which means you need to raise funds to make it cheaper.

Beyond the issue of cost, There is the question of what nine months can teach students in this highly intensive setting. Certainly it can help them develop a certain set of skills: how to report and interview; how to write clearly; how to file a FOIA request. And it certainly links students to professional networks, and to coveted internships and jobs. Cobb also laser-focuses on historical context, something he says young journalists can easily miss. He wants them to have at least “50 years of practical knowledge” in major areas of interest, from US foreign policy to Capitol Hill to criminal justice. And though he is a liberal columnist, he says students are often “surprised” by his commitment not to impose personal views on readers.

This guilt by association has turned LIV into a public relations disaster, with accusations that the tour is a Saudi attempt to "wash the...
Read more
POLITICS

Despite what Donald Trump claimed at the time, the destroyer USS John McCain was partially hidden from view, per White House orders, when the...
Read more
POLITICS

Chess: The last round of the Hans Niemann saga is expected in St Louis on Wednesday | Chess

Hans Niemann will be tested by three of the top 10 grandmasters next week when the 19-year-old, who has been publicly declared a cheater...
Read more

HONGKONG-- Hong Kong's leader announced that the city will no longer require incoming travelers to quarantine in designated hotels as it looks to remain...
Read more

JERUSALEM (AP) — Israel's prime minister said Wednesday that no one would "dictate our open-fire policies," apparently rejecting calls from the United States for...
Read more

Chess: The last round of the Hans Niemann saga is expected in St Louis on Wednesday | Chess

Hans Niemann will be tested by three of the top 10 grandmasters next week when the 19-year-old, who has been publicly declared a cheater...
Read more